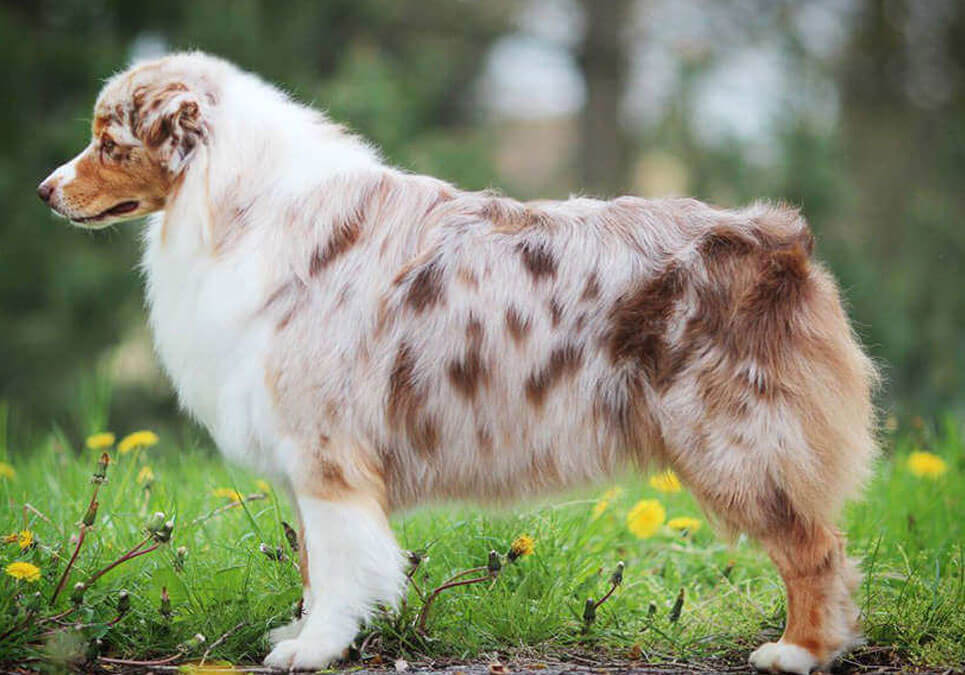 Meet the Australian Shepherd, an intelligent, social, and versatile breed that’s known as both a working and a herding dog. Whether it’s people or animals, their instinct is to round up the troops. They’re active, playful, and love their owners. They have interesting eye colors and come in an array of coats. They're available in standard, miniature, and toy.

The Australian Shepherd is considered a double-coated breed, which means they possess both a top and undercoat. They tend to shed more during the spring and fall months. This time is also when they shed their winter coats. Their coats are extremely important and act as both insulation and protection against hot and cold climates. Like many dog breeds, they’re going to shed. By brushing an Aussie often, you lower the chances of continuous shedding.

How big do Australian Shepherds get?

Generally, Australian Shepherds are considered medium-sized dogs. The males tend to be heavier and taller than the females. The males can range anywhere from 55 to 70 pounds, and 35 to 55 pounds for females. Height also varies from 18 to 21 inches for females and 20 to 23 inches for males.

Are Australian Shepherds good with kids?

If properly trained and socialized early on, Australian Shepherd puppies are great with kids. Also known as a herding dog, they might try to herd small children because that’s in their nature. They do this by nipping at the little kids’ heels. They might fare better with older kids because of this reason. Again, how you train them is how they will react to kids, but the nipping at the heels part isn’t always avoidable. All in all, they make wonderful family pets, and with their active spirit, kids are the perfect energetic match for an Aussie dog.

To answer this bluntly, no, they’re not hypoallergenic dogs. Because of their long coats, their hair contains a lot of dander. It’s not the hair itself that someone can be allergic to, it’s the dander within the fur that causes one to sneeze. Flooring as opposed to carpet, and sweeping it regularly helps with removing it. If you have carpet, think about vacuuming it often to lessen the dander as much as possible. Keeping your dog off the bed is important, along with any fabrics your Aussie may come in contact with.

An Aussie Shepherd ranks high when it comes to being one of the smartest dogs around. With their herding background, they have an instinctual guardian nature, along with a good work ethic. These two characteristics help when it comes to training. Aussie Shepherds tend to pick up basic commands, but because of their clever personalities, anything more than that might be a bigger feat.

How to train an Australian Shepherd?

Because of their high intelligence, an Australian Shepherd puppy is easily trainable. Socializing them early is key because they need to become familiar with a variety of people, unfamiliar things, and new places. It’s necessary to keep them stimulated because remember, they are full of energy. Being a working dog, it’s good to give your Aussie tasks to do. You mustn’t let your dog run the show, so you have to keep a dominant stance at all times to show them who’s boss. Positive reinforcement should always be in play, and a yummy treat doesn’t hurt to reward your pup for good deeds well done.