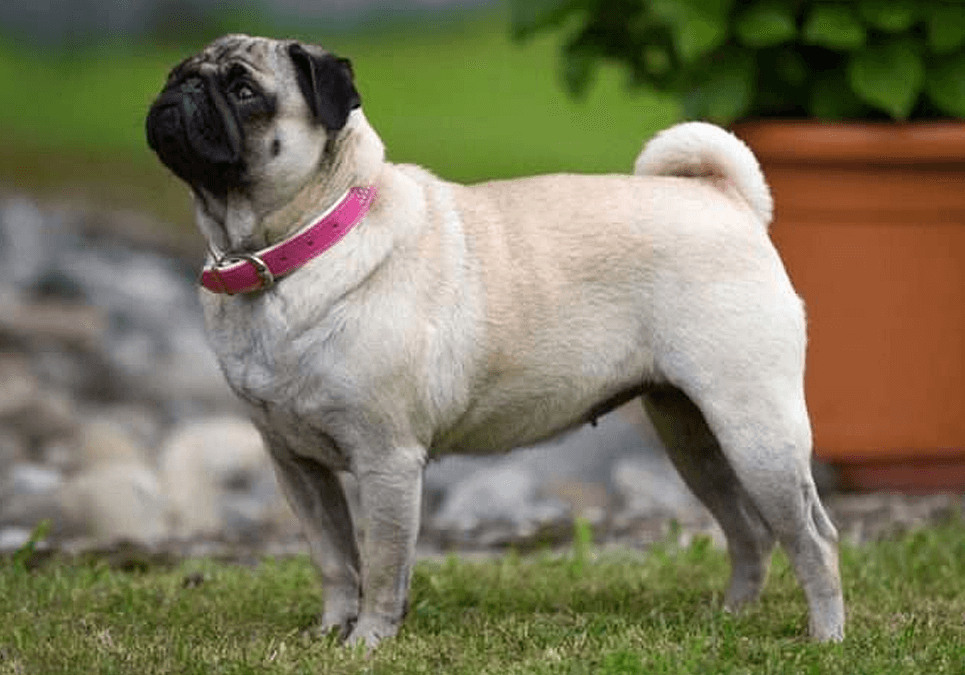 The pug is cute and cuddly, and the ultimate charming dog. He has a very playful side and is a tad bit mischievous. He’s eager to please and very loyal to his loved ones. The best thing about pugs is that they love people, get along with other dogs, and make great companions.

How long do Pugs live?

Pug dogs can live anywhere from 12 to 15 years of age.

Pugs are a heavy-shedding breed, and they will shed year-round, especially those who have a double coat. Some dogs will shed more in the spring and fall seasons.

No, the pug dog isn’t a hypoallergenic dog due to being a heavy shedder. They aren’t a good choice for those who suffer from allergies.

How much do Pugs weigh?

Pugs can weigh anywhere between 14 and 18 pounds.

When do Pugs stop growing?

Pugs stop growing when they reach around nine months, but they will continue to fill out body-wise until their first birthday.

Are Pugs good with kids?

Typically, pugs do well with children, making them a great family dog. They’re a gentle and playful breed, and because of their muzzle shape, they’re unable to produce an aggressive bite, but if they’re not properly trained or socialized, they will nip at a child’s feet. They may bark or lunge at a child as well, which can also be playful behavior.

The pug isn’t known to be an aggressive breed, yet if they exhibit any aggressive behavior, it’s due to them not being properly trained or socialized. They can react because of fear, mistreatment, other dogs, establishing dominance by being territorial, protecting their personal space, or not being spayed or neutered.

Pugs are very happy, affectionate, good-natured dogs. They’re companion dogs, so they get along with everyone.

Do Pugs bark a lot?

All dogs bark, but some sources have said that pug dogs can bark a lot, while others have said they’re not very loud, and they’re on the quiet side.

Pugs, like any dog, have an innate instinct to know how to paddle along. As a breed, their body type, along with them being brachycephalic dogs, swimming can have a lot of risks. It’s dangerous for them because they get out of breath and have difficulty staying afloat. As an owner, you’d have to be there to supervise them at all times.

Are Pugs easy to train?

A pug has the ability to be trained, but this isn’t an easy process. They tend to get distracted easily and can become bored, especially with anything repetitive. The key is to use positive reinforcement and to keep them focused, and a treat on hand for a job well done doesn’t hurt either.

Do Pugs have breathing problems?

Not all, but many pug dogs are prone to, and can have breathing issues.

What do Pugs eat?

A pug will eat (fresh) dry dog food, and if you can afford it, wet dog food. These should be formulated for small dogs. In moderation, human foods such as eggs, sweet potatoes, spinach, carrots, broccoli, green beans, kale, strawberries, blueberries, raspberries, and pet treats are what Pugs eat.