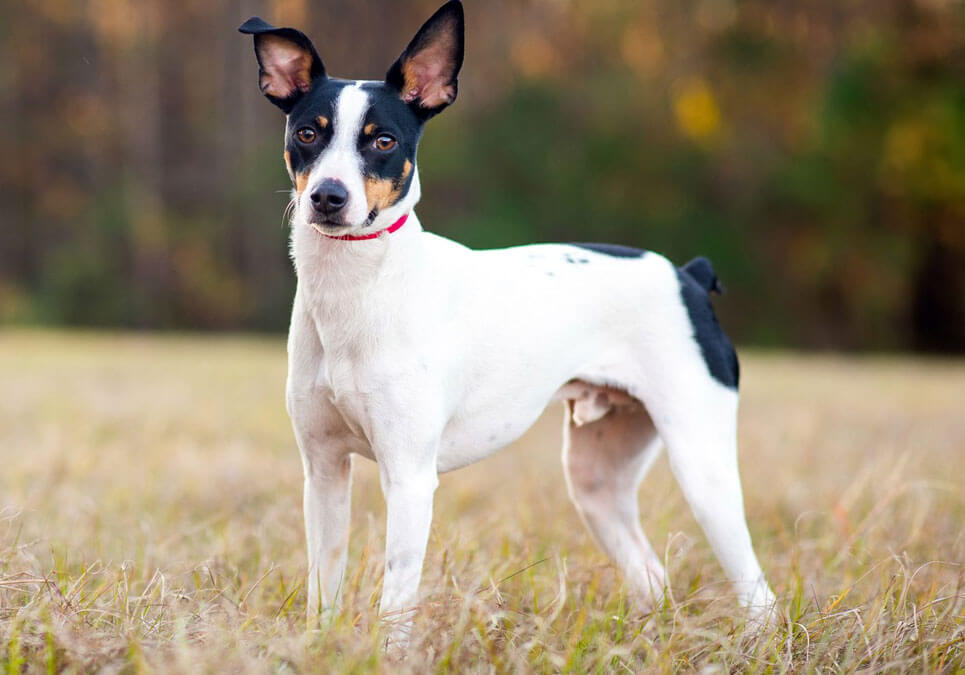 Introducing the Rat Terrier dog. Known for his occasional stick-up ears and charming and loving disposition. He’s athletic and full of energy, and always down to be doing something active. He adores his family and has an eagerness to please. He’s full of curiosity, and lastly, he does well in an apartment setting.

What is a Rat Terrier?

Rat Terrier dogs are an American-born dog breed that has a background in farming and was one of the most common dogs in that arena back in the early years of the 1900s. They’re a cross between a Manchester Terrier, along with a Smooth Fox Terrier, and their origin was first developed in 1820 in England.

How long does a Rat Terrier live?

The Rat Terrier lifespan ranges from 15 to 18 years of age.

Does a Rat Terrier shed?

A Rat Terrier dog is considered to be a moderate shedder. It sheds throughout the year, and heavier during the spring and fall months.

Is a Rat Terrier hypoallergenic?

A Rat Terrier doesn’t qualify as a hypoallergenic dog because its coat releases dander, and that makes them not a good choice for an allergy sufferer.

How big does a Rat Terrier get?

Rat Terrier dogs can grow anywhere in height from 10 to 18 inches (at the shoulder).

How much does a Rat Terrier weigh?

A Rat Terrier dog can weigh in the range of 10 to 25 pounds.

When is a Rat Terrier full grown?

A Rat Terrier doesn’t come into its full-grown size until somewhere between 15 and 18 months of age.

How fast can a Rat Terrier run?

Despite being of small stature, a Rat Terrier dog can run as fast as 27 miles per hour.

How much exercise does a Rat Terrier need?

Being a part of an energetic breed, Rat Terrier dogs need their daily dose of exercise. This should be anywhere from 30 minutes up to an hour per day.

How much should a Rat Terrier eat?

A Rat Terrier adult should consume anywhere from ¼ to 2 cups of food daily, while a Rat Terrier puppy who weighs less than 10 pounds should be consuming anywhere from ¼ to ½ cups of food, and ½ to 1 cup for 10 to 15 pounds, and ¾ to 1½ for 20 to 30 pounds. Both adults and puppies should have high-quality dry dog food, and as an owner, it’s best to consult your veterinarian for the best diet regimen for your dog.

Why is my Rat Terrier so aggressive?

A Rat Terrier dog may display acts of aggressive behavior because they weren’t properly trained or socialized during puppyhood, they were abused or mistreated, or they feel threatened in some capacity.

When do Rat Terrier ears stand up?

The ears of Rat Terrier puppies will stand up somewhere around 3 to 6 months.

How often should you bathe a Rat Terrier?

Various sources have stated different times as to when you should bathe your Rat Terrier. It’s been listed that you can bathe them as much as every day, in addition to twice a week, every other week, and once every three months. This decision falls in the hand of the owner, and how much activity a dog partakes in.

Why does my Rat Terrier lick so much?

A Rat Terrier dog will lick a lot because they’re showing you a sign of affection, they’re grooming themselves, they’re experiencing boredom, or they’re seeking your attention. They also do it as a calming mechanism or because they like the way a human’s skin tastes.