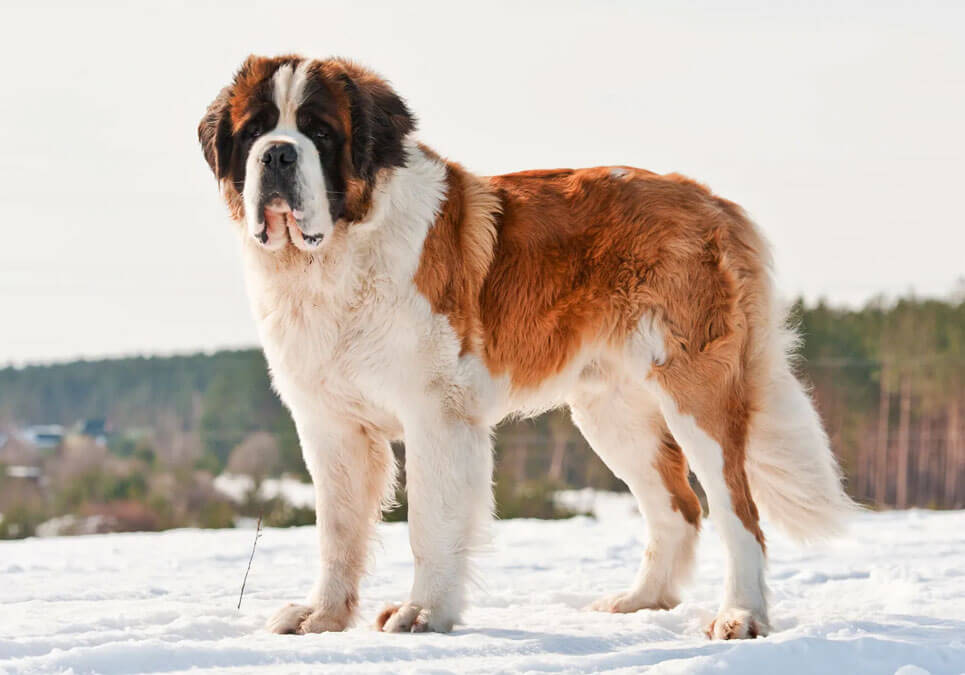 Introducing the St. Bernard. He has an intimidating appearance, but he’s extremely friendly and makes a wonderful companion. He’s devoted to his family and gets along with almost everyone. He’s an outgoing and playful dog who’s even-tempered with a tolerant nature. He’s so caring and aims to please his loved ones.

Where are Saint Bernards from?

The St Bernard is from the region of the Great Saint Bernard Pass. Known as the route that links Switzerland and Italy.

How long do Saint Bernards live?

The St Bernard lifespan ranges anywhere from 8 to 10 years of age.

How big is a Saint Bernard?

How much do Saint Bernards weigh?

Like with height, Saint Bernards also differ in weight between the genders. A male can weigh anywhere from 140 to 180 pounds, while a female can weigh somewhere between 120 to 140 pounds.

When do Saint Bernards stop growing?

Saint Bernard dogs take longer to stop growing than other breeds. They don’t reach their maximum adult size until their second or third birthday.

St Bernards are heavy shedders, and they shed the most during the spring and fall months.

The St. Bernard doesn’t qualify as a hypoallergenic dog, and because of this, this isn’t a good choice for allergy sufferers.

St. Bernards make good dogs because they have a friendly disposition, and they’re very tolerant, gentle, and patient. Because of their large size, they do better with families with older kids.

Are Saint Bernards easy to train?

A St. Bernard is eager to please and learns quickly, so typically they can be easy to train. The difficulty that can occur is because they also possess an independent and obstinate streak that can turn into aloofness which might interfere with training.

Do Saint Bernards bark a lot?

Saint Bernard dogs aren’t known to bark a lot. When they do bark, it’s because they are alerting you, they want something, or because they’re excited.

Various sources discuss St Bernards and their intelligence. It’s been stated that they are very smart and that they’re of below-average intelligence. They’ve been ranked at #65 and #123 when it comes to the list of the smartest dog breeds.

Generally speaking, Saint Bernard dogs aren’t an aggressive breed, but if they were to exhibit any type of aggression, it will be males, and toward other male dogs.

Are Saint Bernards good with other dogs?

In general, a St. Bernard gets along with other dogs if properly socialized.

Are Saint Bernards good with cats?

A Saint Bernard can get along with cats, but they should be raised with them during puppyhood.

Yes, Saint Bernards possess a protective nature, especially over their loved ones, which makes them good guard dogs.

Can a Saint Bernard live in an apartment?

A St Bernard dog is large in size and needs its space to maneuver around. It doesn’t do well in apartment settings.

Do Saint Bernards need a lot of exercise?

A St. Bernard doesn’t need a lot, but it needs to have enough exercise to prevent obesity from setting in. An hour a day of activity is sufficient.

Can a Saint Bernard be a service dog?

Yes, St Bernard makes a wonderful companion, and in turn, can be a good service dog.

How much does a Saint Bernard eat?

Saint Bernard dogs are large in size and consume a lot of food. They should be eating twice a day, and having anywhere from 5 to 6 cups of high-quality dry dog food.