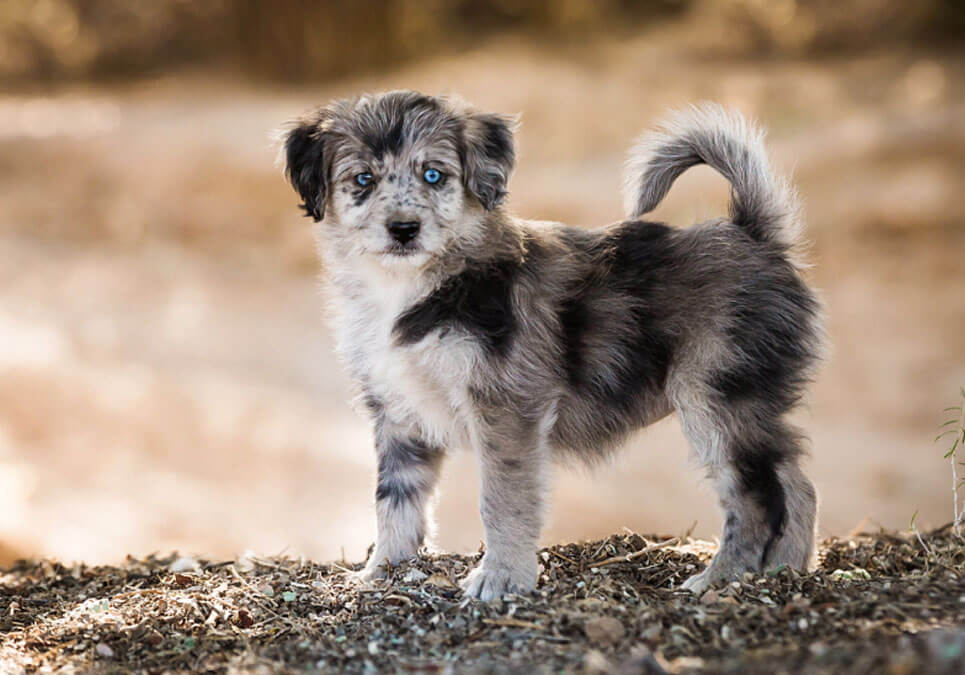 The Aussiedoodle breed is a designer dog who’s not only patient, but easy-going and cheerful. This adorable pup is very adventurous and playful that you’ll never become bored with their high-spirited and friendly temperament. They’re very loving and affectionate, and make the best companion dogs because they’re very sociable and full of life.

What is an Aussiedoodle?

An Aussiedoodle is a cross between an Australian Shepherd and either a Miniature or Standard Poodle. They’re also known as an Aussiepoo or an Aussiepoodle.

Generally speaking, Aussiedoodles aren’t big shedders. Being half Poodle helps them to be a low-shedding breed.

Aussiedoodle dogs are considered hypoallergenic dogs because they don’t shed much.

How big do Aussiedoodles get?

An Aussiedoodle dog can grow as tall as 14 to 25 inches in height.

How much do Aussiedoodles weigh?

Aussiedoodles range in weight. They can vary anywhere between 25 to 75 pounds.

When do Aussiedoodles stop growing?

On average, Aussiedoodles will grow to their potential height by their first birthday, and will finish growing between that first birthday up until two years of age and will possibly fill out in girth and weight a little past that.

How long do Aussiedoodles live?

Aussiedoodles have a lifespan that ranges between 10 to 14 years of age.

Do Aussiedoodles bark a lot?

All dogs bark, and the Aussiedoodle is no different. The Aussiedoodle breed, along with his Poodle and Australian Shepherd parents, aren’t known to be big barkers.

Yes, Aussiedoodles are good dogs. They make excellent family pets because of their loving and protective nature. They’re also loyal and patient and enjoy their family’s company.

Aussiedoodle dogs aren’t an aggressive breed. In fact, they are quite the opposite. They’re loving, friendly, and gentle beings.

Are Aussiedoodles easy to train?

Simply stated, yes, Aussidoodle dogs are easy to train. Because they’re highly intelligent, and eager to please, and with emphasis on the former, they pick up things fairly easily and quickly.

With having two intelligent parental breeds, those being a Poodle and Australian Shepherd, it’s no wonder that their offspring, an Aussiedoodle is just as smart, and as previously mentioned, this makes them easy to train. This also helps with their memory skills, problem solving, and they feel empathy.

Are Aussiedoodles good with other dogs?

Yes, Aussiedoodle dogs get along with other animals, including other dogs. To get to this point, they need to be properly socialized and trained from an early age. With the Aussiedoodle having a herding instinct, they might try to herd smaller dogs.

When Aussiedoodles are referred to as hyper, that tends to lead people towards a negative connotation about the breed. Essentially, they can be hyperactive, but this has to do with their energy levels. They are extremely active, and love to play. In turn, the answer could be yes, but not to be seen in a negative light.

How much should I feed my Aussiedoodle puppy?

Aussiedoodle puppies should consume around 1 cup to 1 ⅓ cups of high-quality food each day. Their food intake should increase as they grow.