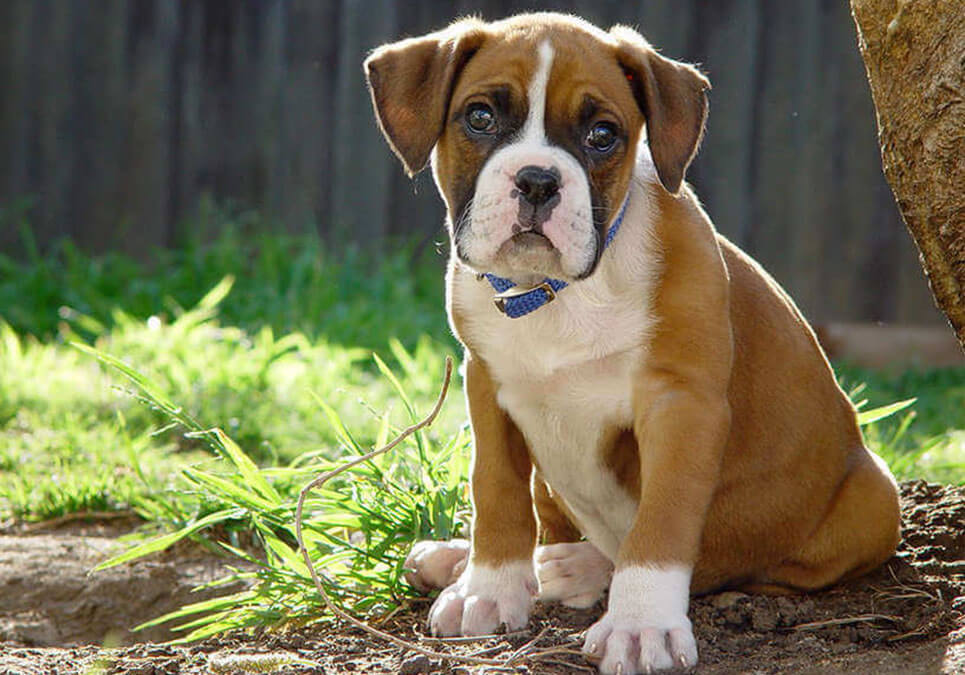 Boxer dogs are an adorable breed that is happy, gentle, and affectionate. They’re also devoted to their loved ones and are very bright with an inquisitive nature. Being very energetic, they’re filled with much amusement and are always down to play. Although they have a strong build, they have a good-natured disposition, and they’re friendly, too.

Why are Boxer dogs called Boxers?

It’s unknown, but it’s speculated that the Boxer name itself has two potential answers to its origin. One is that the name stems from Bullenbeisser (the German Bulldog) or Boxl, which is now extinct, and where the Boxer has its roots. Two can be due to Boxer dogs while they stand on their hind legs and using their front paws in a boxer-like fashion with fellow dogs in a playful manner.

Boxer dogs have an easy-to-manage, single coat, short hair, and are considered low-to-moderate shedders. They can shed a little at a time, or excessively during the spring and fall months. Some weekly brushing can help keep it under control.

The Boxer dog breed isn’t hypoallergenic. They shed and produce dander which has to potential to give allergy sufferers an allergic reaction.

How long do Boxer dogs live?

The Boxer dog lifespan can range anywhere from 10 to 12 years of age.

How big does a Boxer dog get?

How much does a Boxer dog weigh?

A Boxer dog can vary in weight between the sexes. The males can weigh anywhere from 65 to 80 pounds, while the females can vary between 50 to 65 pounds.

Is a Boxer a good family dog?

The Boxer dog breed can be a good family dog, but it’s essential that they’re well trained and properly socialized as a puppy. They love children, and with their high energy, they make great playmates. Because of their active and enthusiastic nature, they might not be the best choice for families with small children unless they’re constantly supervised around one another.

Boxer dogs can be aggressive. This can occur when they’re not trained or socialized properly. They can become aggressive and attack when it’s another dog of the same sex. This is exhibited through dominance and being territorial.

Is a Boxer a smart dog?

Ranked #90 on the list of the smartest dog breeds, the Boxer dog breed is intelligent and loves to learn.

Although in their lineage they were fighting dogs, on average, Boxer dogs aren’t dangerous. This boils down to having the proper training, along with being socialized as a puppy. They can attack out of protection for a loved one, and make great guard dogs.

How to keep a Boxer dog warm in winter?

The Boxer dog breed doesn’t do well in any extreme weather conditions. This is due to their short-haired coat. About winter, they should be kept inside, and if you have to take them out for a walk, be sure to make it a short-distanced stroll. They should also be wearing dog sweaters and coats on chilly days as another form of protection against the cold.

Are Boxer dogs born with tails?

Yes, they are born with tails. Because of their working dog history, Boxer dogs had their tails cut to enhance their work performance. Due to aesthetics, their tails are docked while they’re very young.

A Boxer dog can enjoy the water, but they aren’t natural-born swimmers. They have difficulty breathing with their short snouts while they’re emersed in water and should be supervised at all times.