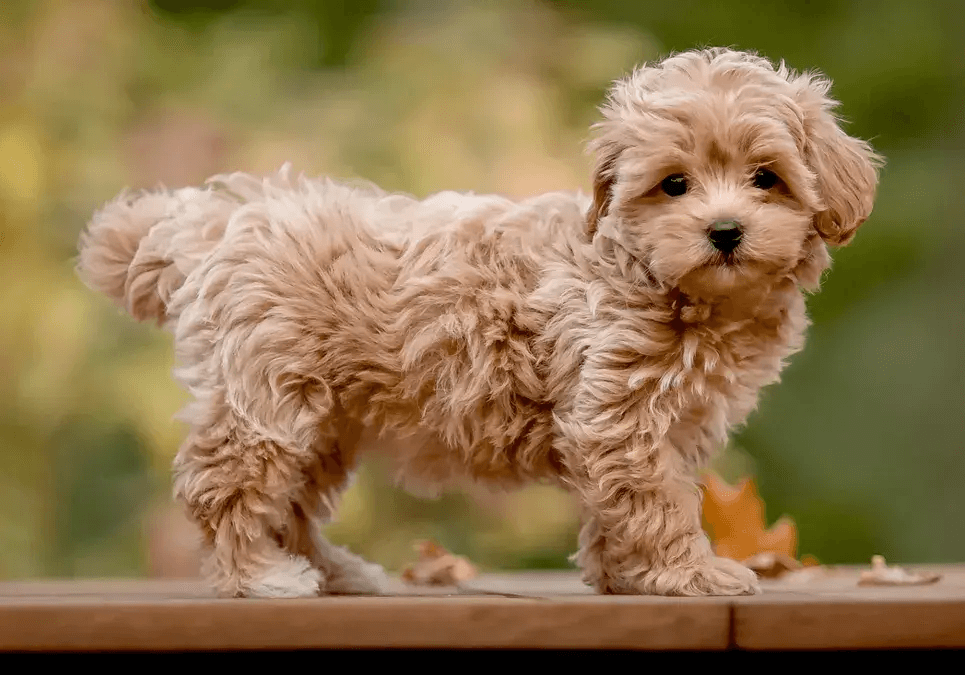 Maltipoos are a happy breed. They have a love for life, and we as humans (more so the French), call it, “Joie de vivre”. They’re also sensitive dogs, so they can sense their owner’s wants and needs. They love to cuddle when the moment presents itself. They seek comfort in their owner’s arms and presence.

What is a Maltipoo?

A Maltipoo is what you’d call a hybrid dog. They are a mixture of two purebred dogs. Those breeds are a Maltese and a Poodle. They’re one of the more popular designer dogs around. They are adored by many people and celebrities alike.

How big do Maltipoos get?

Depending on the size of the Poodle parent, the Maltipoo size will vary. On average, they can stand as tall as 8 to 14 inches.

How much do Maltipoos weigh?

Just like their height, Maltipoos vary in weight, too. They can range anywhere between 5 to 20 pounds. As an owner, you must keep in mind that these are small dogs, and when it comes to being in a child’s presence, they must be supervised. Older children tend to know how to interact with and handle a smaller dog, whereas a younger child might unknowingly injure them.

How long do Maltipoos live?

Typically, a Maltipoo adult can live anywhere from 12 to 15 years. This is contingent upon their overall health, in addition to getting exercise, and eating well. In comparison to their taller and bigger counterparts, smaller dogs tend to have a longer lifespan.

Because they come from two varying breeds, those being a Poodle and a Maltese, it’s unknown what type of coat a Maltipoo puppy might come out with. In general, they’re considered a low-shedding breed, and have a low amount of dander, making them good pets for allergy sufferers. They have wool-like coats that range from slightly wavy to curly, so for example, if they possess more of a Poodle type of coat, the less dander they’ll produce. You can find yourself a beautiful bi-colored white and black Maltipoo, a white, black, apricot, red, or brown Maltipoo.

Because no dog is 100% a hypoallergenic dog, Maltipoos, in particular, fall under the umbrella of those that are considered hypoallergenic. They tend to shed less, therefore, producing low amounts of dander. This is especially true if they take after their Poodle side, making them the ideal dog for those with allergies.

Do Maltipoos bark a lot?

Maltipoos are still dogs, so they’re going to bark, but they aren’t known to bark excessively, continuously, or loudly. When they do bark, it’s usually because they hear a stranger, or when they’re playing. If they bark a lot, it goes along with their hyper energy, or because they fear, or are anxious about something.

Maltipoos are very smart. This stems from their parental breeds. Maltese and Poodles, combined, are both highly intelligent breeds. This gift of smarts comes in handy when it comes to training them.

Are Maltipoos easy to train?

Being an intelligent breed, Maltipoo puppies pick up things quickly. You as their owner, need a lot of persistence, especially a lot of patience since this isn’t an easy feat with any dog, not just Maltipoos. It’s best to start socializing them, as well as doing obedience training as early as possible. You want to set particular behaviors in motion, especially reinforcing the positive ones.

The Maltipoo dog isn’t known for being one of the aggressive breeds out there. In fact, they’re known for being quite the opposite. If they display any aggressive traits, this is usually due to improper training or socialization, health issues, trying to show dominance, or you being near their food.