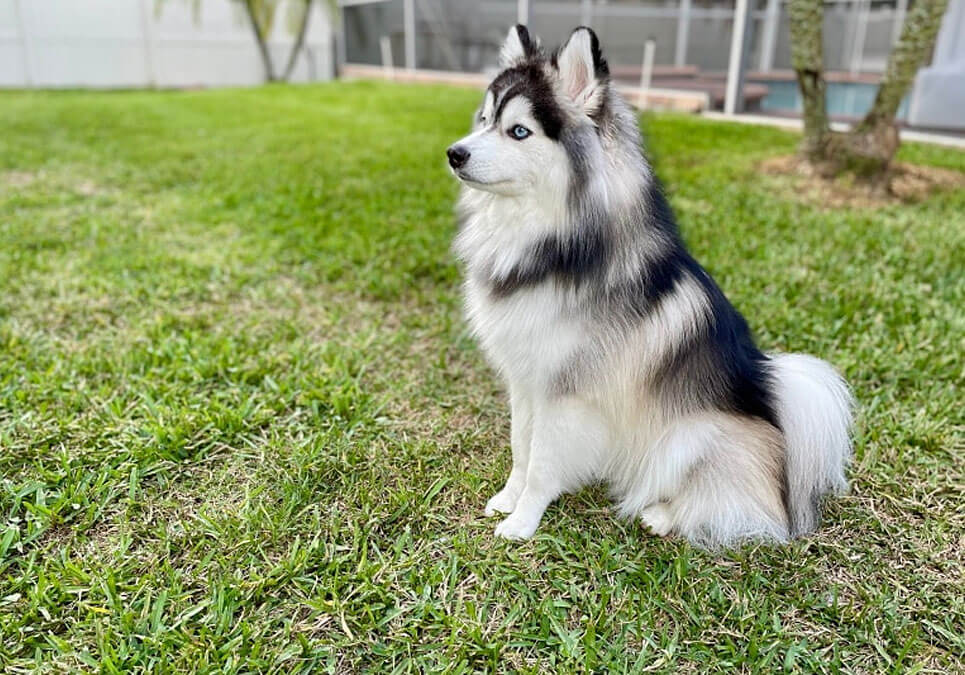 Pomsky dogs are beautiful and confident hybrid dogs who can have bold demeanors. They’re highly Intelligent, along with being very lively and ambitious. They’re also affectionate with sweet dispositions. Their alert and protective natures make them excellent watchdogs. Lastly, you can’t help but love their friendly and funny personalities, which makes them great family pets.

What mix is a Pomsky dog?

A Pomsky is a designer dog that’s a cross between a Pomeranian and a Siberian Husky. This offspring would be called an F1 dog from the F1 generation, which is the result of two purebred dogs mating.

How big is a Pomsky dog?

When do Pomsky puppies stop growing?

Being the offspring of two big-shedding dogs, a Pomsky doesn’t qualify as a hypoallergenic dog. He’s not a good choice for those individuals who suffer from allergies.

Yes, Pomskies can exhibit aggressive behavior, especially if one of their parents were aggressive. They can become aggressive if they’re not handled correctly, they’re stressed, or they weren’t socialized or trained properly. Their aggression can be in the form of biting, snapping, or growling.

Are Pomsky dogs good with cats?

With an early introduction, proper training, and socialization, a Pomsky dog can along with cats just fine. If there happens to be an issue, this could be due to jealousy.

Yes, Pomskies are very intelligent dogs. Their Siberian Husky parent ranks #45 on the list of the smartest dogs, while their other parent, the Pomeranian, ranks #23.

When do Pomsky puppies calm down?

Pompsky dogs are naturally energetic, so one good way to help with this is to tire them out with exercise. If your Pompsky puppy jumps on you, you must nip this behavior in the bud by pushing them back down or turning away from them. Another way to help combat this is by praising calm behavior with treats.

Why do Pomskies howl?

Stemming from their parental breed, the Siberian Husky, a Pomsky dog has a tendency to howl. This is instinctual and it could be anything from sirens to music.

Do Pomsky dogs bark a lot?

In general, no. Pomskies don’t bark a lot, but this is all dependent on how they were trained early on as Pomsky puppies and which parent they take after. Huskies aren’t big barkers, while Pomeranians can be yappers. Sometimes they’re quiet, and sometimes they’ll bark for attention, or they’ll yap or howl.

Can Pomsky be left alone?

A well-adjusted, well-trained adult Pompsky can be left alone for up to 8 hours. This needs to be reinforced with daily exercise and regular mental stimulation and training since puppyhood.

Can you run with a Pomsky?

A Pompsky dog is very active, so he enjoys running and playing. He can run up to 15 miles per hour.

When do Pomsky ears stand up?

Stemming from a Husky, whose ears stand up at six weeks of age, a Pompsky puppy should have its ears standing up around six months of age.