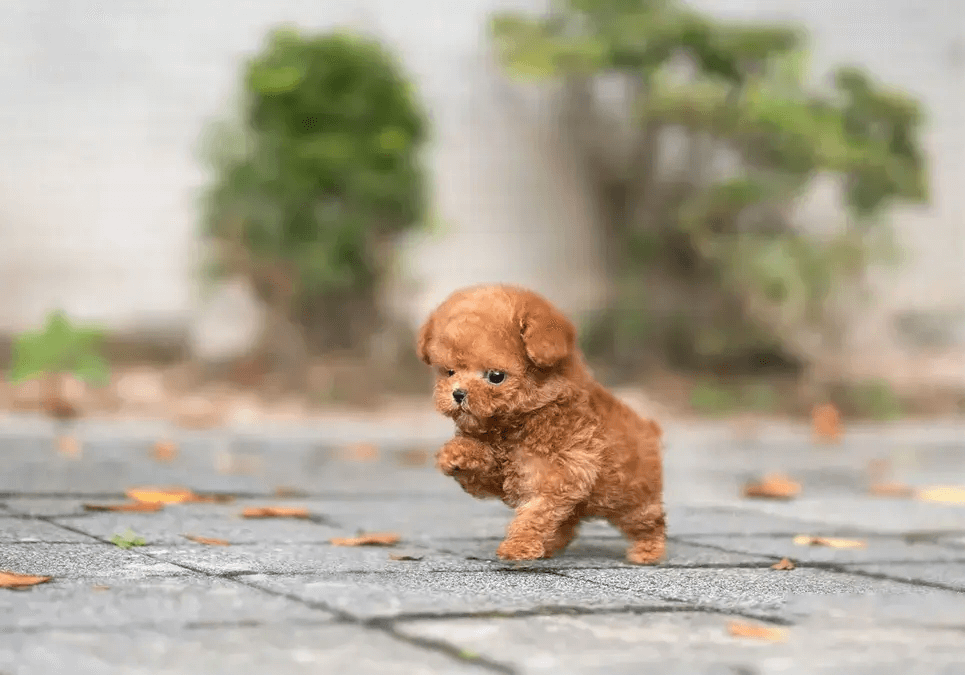 Introducing the adorable Toy Poodle, part of an agile breed who’s a very loving and affectionate pup, who also makes a wonderful companion. Their personality certainly doesn’t match their size. These perky pooches are very playful and happy. They’re very people-orientated, and they might look like your average lap dog, but they’re not, they’re very active and love doing tricks.

Toy Poodles hardly shed, making them a good choice for allergy sufferers. They have a coarse yet curly coat, and when it comes to holding dander, which essentially is dried skin cells, it can easily be brushed out.

Considered to be a hypoallergenic dog, and due to the fact that the Toy Poodle is a low-shedding breed, their coats don’t hold dander like other dogs, so the answer is yes.

How often should you bathe a Toy Poodle?

Your Toy Poodle has an image to uphold, and that goes along with their regal essence, so bathing them should take place once every three weeks.

How big do Toy Poodles get?

On average, a Toy Poodle puppy will grow as tall as 10 inches as a full grown Toy Poodle.

How much does a Toy Poodle weigh?

Generally speaking, a Toy Poodle dog will weigh somewhere between 6 to 9 pounds, and sometimes even less.

When do Toy Poodles stop growing?

Typically, a Toy Poodle will stop growing somewhere ranging between the ages of 6 to 9 months.

In comparison to the Miniature Poodle, a Toy Poodle is true, more fragile. They have smaller frames, along with smaller bones, therefore, they are far more delicate and prone to injury.

How long do Toy Poodles live?

Toy Poodles lifespan can be fairly long sometimes, but they typically live anywhere from 12 to 16 years of age.

Yes, Toy Poodles are very intelligent. They’re known as the second smartest dog in the world. Their sense of smartness helps when it comes to training them. They also have a high emotional intelligence which means they can sense their owner’s moods, and this helps make them a good emotional support animal.

Do Toy Poodles bark a lot?

Just as with any dog, they all bark. Some dogs bark more than others, but when it comes to Toy Poodles, they bark a lot. When they do bark a lot, they’ll do what’s known as, “Trigger barking”, and this is when they’re aware of someone or a situation happening. This can also include when they’re left alone, boredom, want attention, particular weather conditions, or feel some type of anxiety. With training, this can all lessen and be under control where they’ll only bark within good reason.

Are Toy Poodles good with kids?

A Toy Poodle dog can make a great family pet, but because of their small stature and their fragile frames, they aren’t a good match for those who have small children. Little kids have a tendency to be a tad bit aggressive with smaller dogs. This includes roughhousing, and because of this, a Toy Poodle might bite or snap.

Typically speaking, no, they aren’t an aggressive breed, and not outright. Because they are smaller size dogs, in the same way, they react to smaller children, Toy Poodles can become aggressive if they are teased or mishandled in any way. If there is any form of neglect, or they’re not properly socialized, these are other factors for aggression. Socializing them as early as possible, can help alleviate any type of aggressive behavior.

Are Toy Poodles easy to train?

Because of their high intelligence, Toy Poodles are easy to train because they understand commands, and are very eager to please their owners.

The answer goes along with their overall training. Yes, the Toy Poodle is easy to potty train mainly due to their intelligence. For both types of training, they do well when they’re rewarded with a treat for good behavior.