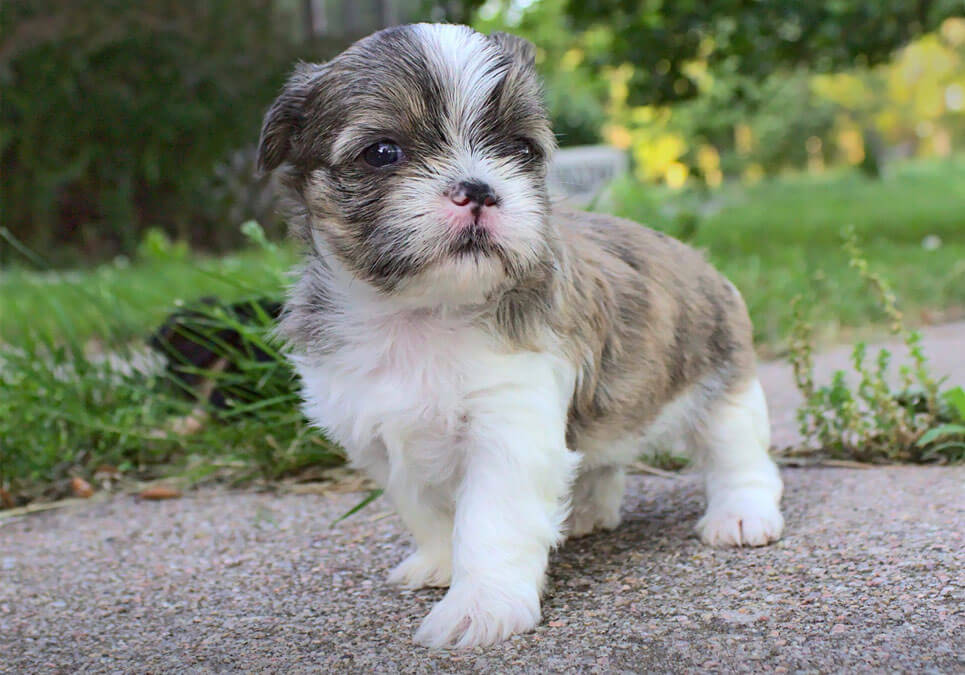 A Shorkie dog is a loving, and affectionate pup who’s sweet as sugar, but can be a little bossy and feisty, too. They have a bubbly personality, along with being playful, fun-loving, and energetic. These cuties are highly intelligent and a little mischievous. They’re the ideal watchdog who'll alert you as to what’s going on.

What is a Shorkie?

A Shorkie is a designer dog that is a mix between a Shih Tzu and a Yorkshire Terrier. They’re also referred to as Yorkie Tzu, ShihTzu Yorkie, and Shorkie Tzu.

Does a Shorkie shed?

The Shorkie dog is considered a low-shedding breed. This stems from their parental breeds also being low-shedders whose coats don’t shed much.

Is a Shorkie hypoallergenic dog?

Because they’re low-shedders, Shorkies are considered hypoallergenic dogs. This is due to them not releasing a lot of dander, which in turn, is bad for allergy sufferers, making them a great choice.

How big do Shorkies get?

The Shorkie dog can grow as tall as 6 to 14 inches in height (at the shoulders).

When do Shorkies stop growing?

Shorkie dogs typically stop growing between the ages of 7 to 9 months old.

How long do Shorkies live?

Shorkies can live a fairly long life. Their lifespan can range between the ages of 11 to 16 years.

How much should a Shorkie eat?

When it comes to feeding your dog, a Shorkie puppy should consume four meals within a day, and from six months of age on, you can reduce it down to two as they become an adult Shorkie.

A Shorkie isn’t known to be an aggressive dog, but if they aren’t properly trained or socialized, their unwanted behavior can become an issue. They tend to bite or nip when they feel frightened, and they can become territorial or protective. The problem with many owners who have small dogs is that they coddle them too much, and they don’t get enough training. The problem with the Shorkie dog is that they don’t realize how small they are. All in all, they must learn how to interact with humans and other animals from an early age.

There’s a bit of a catch-22 going on when it comes to the intelligence of a Shorkie. They are highly intelligent, but they also possess a stubborn streak. This becomes an issue when it comes to training them because they will do whatever they please.

Are Shorkies easy to train?

To answer simply, yes and no. Shorkies are very intelligent, which makes many dogs who are smart easy to train. The difference with a Shorkie dog, as previously mentioned, is that they have a stubborn streak. In addition, they also have a short attention span, which combined, can make training them a not-so-easy task. They do well when you’re calm and consistent, and when you use positive reinforcement. It’s also best to start with short training sessions.

Yes, Shorkies are good dogs because they make great companions. They have an outgoing and friendly disposition and do well with single people, seniors who have an active lifestyle, couples, and families with older children. Because of their size, they need to be supervised around younger children.

Do Shorkies bark a lot?

The Shorkie isn’t quiet by any means. This dog makes a good watchdog because they’re very alert, and they’ll bark when someone is approaching, when they’re startled, or when they sense any disturbances happening.

Are Shorkies good with other dogs?

Because of their territorial nature, and not realizing their size, Shorkie dogs can have issues with other animals, or dogs in this case, but if they’re properly trained and socialized as a puppy, they’ll do fine.