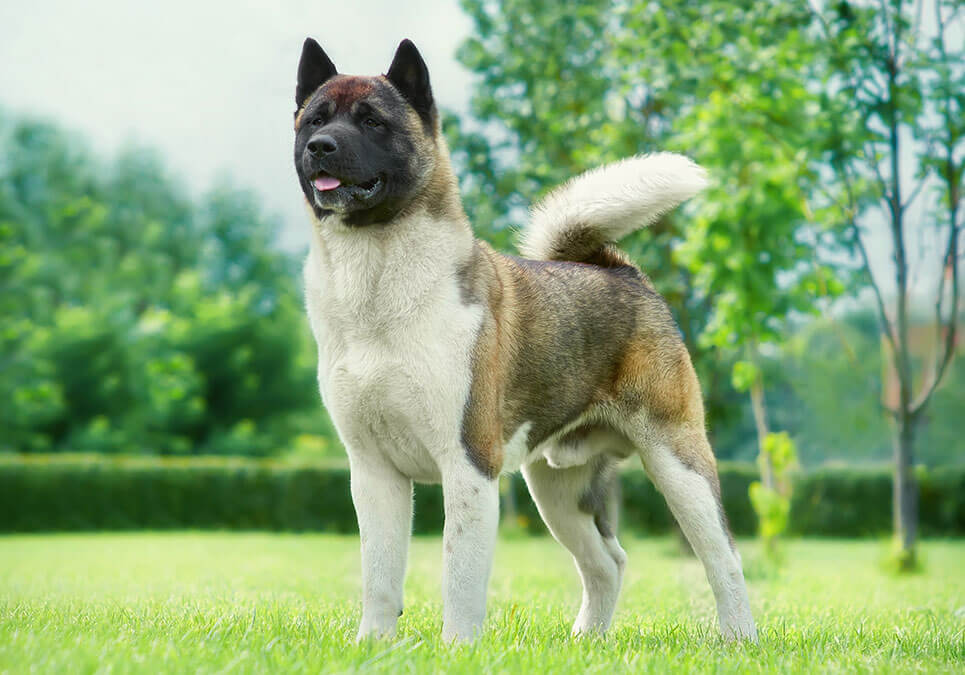 Introducing the Akita. He’s a working dog who’s very alert and fearless with a courageous spirit. Because of his protective nature, he makes an excellent guard dog. He’s so loving and loyal to those he adores. He can be somewhat reserved at times, and silly and playful with a bit of energy at other times.

Where are Akitas from?

An Akita dog originated in the northern mountains of Japan. They were known prior as snow country dogs.

How long do Akitas live?

The Akita lifespan ranges from 10 to 12 years of age.

Yes, Akitas shed throughout the year, but they shed more heavily twice a year, which is during the spring and fall.

Because the Akita dog breed sheds, it doesn’t qualify as a hypoallergenic dog. They aren’t a good choice for those who suffer from allergies.

How big do Akitas get?

Akita dogs can stand as tall as anywhere from 24 to 28 inches (at the shoulder).

How much do Akitas weigh?

When do Akitas stop growing?

An Akita dog won’t be fully grown until somewhere between ten months old to their first birthday. They will continue filling out up until their second birthday.

Are Akitas good with kids?

Akita dogs can be good with kids if they’re properly socialized and trained from a puppy. They do better with older kids because older children know how to interact with this dog better than younger children.

The Akita breed can be infrequent barkers. They’re also known as “The Silent Hunter” because of their quiet demeanor.

Are Akitas good with other dogs?

Akita dogs have a tendency to be aggressive towards other dogs. They have a dominant and unpredictable nature about them, and they like being the only dog. Their aggression is usually towards the same sex.

Are Akitas good with cats?

Because the Akita dog has an unpredictable nature, along with a preying instinct, it’s not a good idea to leave these two animals alone. This pairing has to be supervised, even if your Akita has been trained and socialized.

Yes, Akitas are highly intelligent dogs. They’ve ranked #54 on the list of the smartest dog breeds.

Akita dogs tend to be aggressive. They possess dominance and will exhibit it at any time if they aren’t properly trained or socialized as a puppy.

Are Akitas easy to train?

Although they are intelligent dogs, the Akita breed isn’t easy to train. They have both dominant and stubborn streaks that make them set in their ways when it comes to certain behaviors, which gets in the way of training them.

Are Akitas easy to potty train?

In short, no, they aren’t easy to potty train because Akita dogs have an air of independence, in addition to their stubborn nature, which makes them difficult to train. They are, however, very clean dogs, and that helps with the housebreaking training process.

The Akita dog breed can live in an apartment setting as long as they’re exercised daily. They aren’t excessive barkers, and, they have a calm demeanor which makes them ideal for apartment living.

No, Akitas aren’t a good choice for first-time dog owners because they have unpredictable personalities and can be difficult to train.