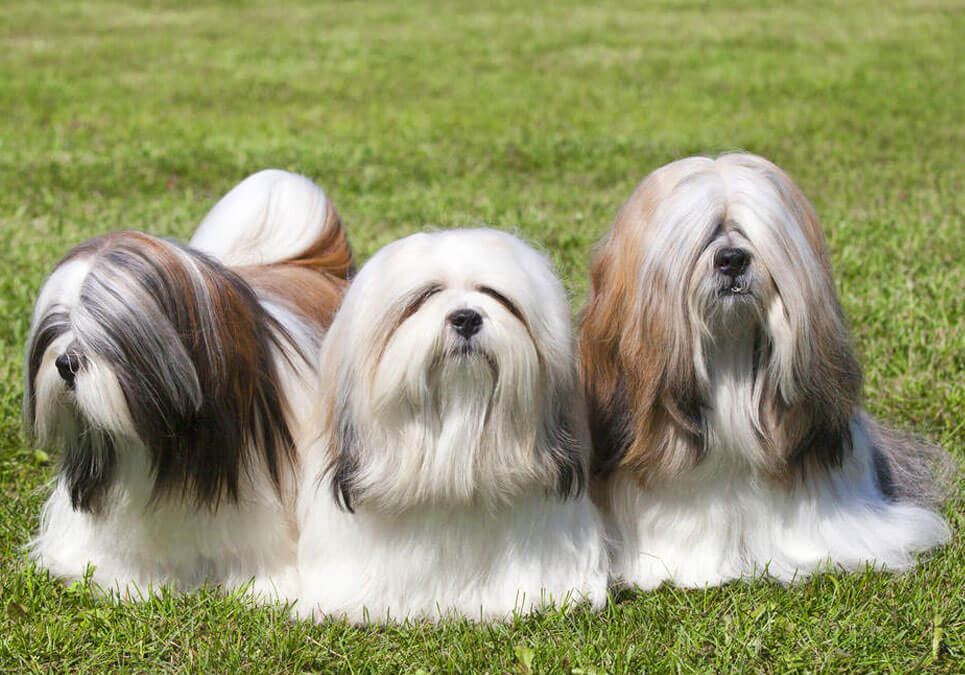 Lhasa Apsos are good companion dogs who are very affectionate and devoted to their loved ones. They’re intelligent with a well-balanced temperament and have a little bit of a stubborn streak. They are loving and happy dogs who are full of energy. You can’t miss their confidence, along with their fierce and sturdy appearance.

Where do Lhasa Apso dogs come from?

The Lhasa Apso dog originated in Tibet. It’s been said that the breed existed roughly around 800 A.D.

The Lhasa Apso is considered to be a low-shedding dog. When they shed, it’s sparse. Their shedding mirrors that of humans in the sense that it’s a gradual process when the hair falls out.

The Lhasa Apso breed falls under the hypoallergenic dog category. This is due to them being minimal shedders, which makes them a good dog for those who suffer from allergies.

How long do Lhasa Apsos live?

The lifespan of Lhasa Apsos ranges anywhere between 12 to 14 years of age.

How big does a Lhasa Apso get?

When it comes to weight, the Lhasa Apso dog breed can weigh anywhere from 13 to 18 pounds for males, and 11 to 15 pounds for females. Unlike weight, their height doesn’t differ between the genders. A male and female Lhasa Apso can both grow in the range of 10 to 11 inches tall (at the shoulders).

Do Lhasa Apso bark a lot?

The Lhasa Apso dog has the potential to bark frequently. The name Lhasa Apso, also known as Abso Seng Kye, means “Bark lion sentinel dog”, which was its original Tibetan name. This breed lives up to its name but within reason. They were initially bred to be guard dogs, so they’re always on alert, and will bark when someone is entering the home. They’ll also bark if they perceive a potential threat or when they need to let off steam from not being exercised enough.

How much exercise does a Lhasa Apso need?

The Lhasa Apso breed enjoys playing with their toys and going on daily walks. They love being a lapdog, but they are prone to gaining weight, so they must get their daily dose of exercise. This should be done around 30 minutes per day.

When are Lhasa Apsos fully grown?

On average, a Lhasa Apso puppy will become a full-grown adult by the time they reach its first birthday. This growth process may also take up to 18 months.

Lhasa Apsos are considered to be intelligent dogs. They rank #68 when it comes to the list of the smartest dogs.

How much food should a Lhasa Apso eat?

Your Lhasa Apso dog should be eating twice a day. Each meal should consist of anywhere between ¾ and 1 cup per day of food.

A Lhasa Apso isn’t always a friendly dog, so it’s best to cultivate affable behavior by socializing them at an early age. This should also go towards people, kids, other dogs, and animals. They do, however, get along with their owners and family.

Lhasa Apsos are bred to be guard dogs, so because of their guarding instinct, along with the domineering side they also posssess, both behaviors can come across as aggressive behavior. Early socialization and training can help add some relief to these attitudes.

Are Lhasa Apsos easy to train?

Lhasa Apsos can be a little stubborn at times, which makes training them a difficult task. They also have an independent nature, so it’s best to be consistent and have patience when training your Lhasa Apso puppy.

Being a small dog, a Lhasa Apso has a small bladder and bowels, which means it has to go to the bathroom more frequently than larger dogs. This makes it more of a challenge to train them. Crate training is one helpful way to help with training Lhasa Apso puppies.