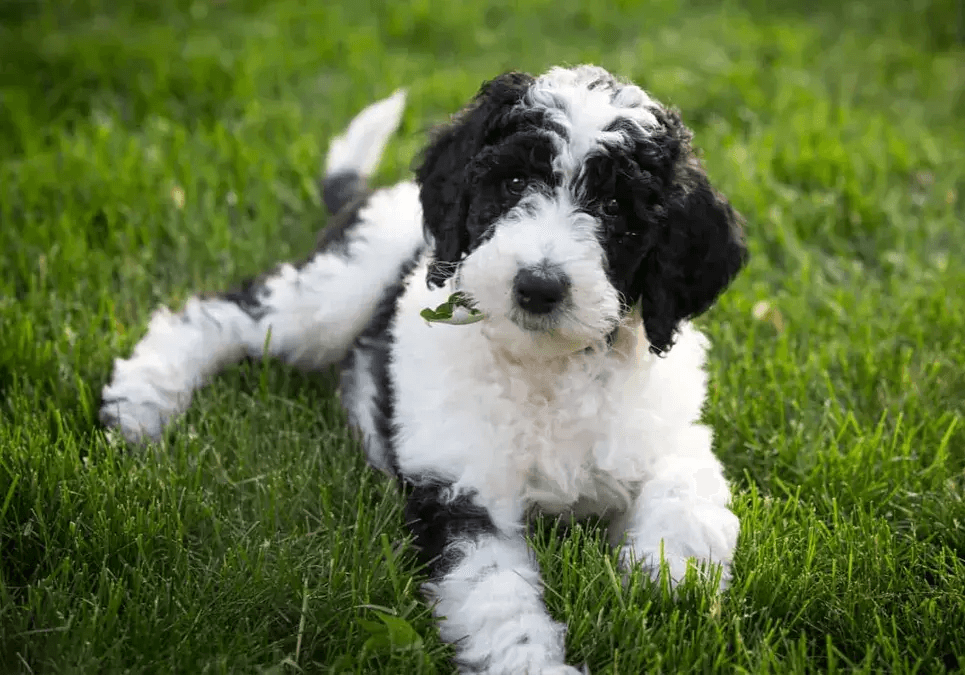 This adorable and adaptable breed has a sensitive nature, and this also adds to them being a nice dog to have. They’re a ball to be around because of their clever and fun-loving nature. Sheepadoodles are very loyal to their owners, so they tend to become attached, and can bond quickly.

What is a Sheepadoodle?

A Sheepadoodle is a lovely mix between an Old English Sheepdog and a Standard Poodle. This designer dog breed is also known as a Sheepa-poo, Sheepdogpoo, Sheeppoo, Sheepdogdoodle, and a Sheepdoodle.

How big do Sheepadoodles get?

How big do Mini Sheepadoodles get?

On average, Mini Sheepadoodles will get as a big as 15 to 20 inches tall, along with weighing anywhere between 30 to 35 pounds. Sometimes, they can weigh even more.

Sheepadoodles are considered a low-shedding breed, which means that they’ll still shed, but not as often as other types of dogs. Coming from two different purebred dogs, you’ll never know what the mixture of each will bring. It can even vary within the litter. It’s a genetic toss-up. Poodles typically have a curly yet coarse-textured coat, while an Old English Sheepdog has a not straight nor curly, shaggy coat. A Sheepadoodle puppy can come out with more of the Poodle’s coat, more of the Old English Sheepdog’s coat, or a mixture of both. One never knows.

Overall, and in comparison to other dog breeds, a Sheepadoodle, in general, is mostly considered a hypoallergenic dog. Because all dogs shed, there’s no guarantee that yours won’t, but this designer dog breed is on the lower end of the shedding spectrum, which is good for those who suffer from allergies.

Do Sheepadoodles bark a lot?

Known for being gentle giants, Sheepadoodles don’t usually bark a lot. Since they make good watchdogs, they’ll tend to bark when someone is nearing your home. This is good as far as protection is concerned, but you don’t have to worry about them barking at people or other dogs, because they love interacting and socializing with others.

A Sheepadoodle is part Poodle, and they’re listed as one of the smartest breeds around, so they are bound to get at least half or more of said intelligence. In addition to the Poodle, an Old English Sheepdog is also a smart breed, so this makes Sheepadoodles intelligent dogs.

Are Sheepadoodles good with other dogs?

To answer simply, yes, because they love the company of others, but it all boils down to your dog’s temperament, and if they are properly trained and socialized from an early age.

What is an F1 Sheepadoodle?

Like people, dogs have generations, too. An F1 Sheepadoodle is the result of two purebred dog breeds, those being a Poodle, and an Old English Sheepdog, mating, and from there, the first generation derives – that being a Sheepadoodle.

Are Sheepadoodles easy to train?

Sheepadoodle puppies stem from two intelligent breeds, so that helps them when it comes to understanding and following commands, and just obedience overall, because they’re quick learners. Positive reinforcement is essential when it comes to training, along with rewarding them for good behavior with a yummy treat. Training should start as early as possible because they tend to get a little boisterous as puppies.

Are Sheepadoodles easy to potty train?

Yes, and no. Yes, because as previously stated, they’re quick learners, and they’re also eager to please their owners, so that helps. It can also be a little time-consuming, in addition to being somewhat frustrating, but with proper training and positive reinforcement, when it comes to your little Sheepadoodle puppy being housebroken, you’re good to go.